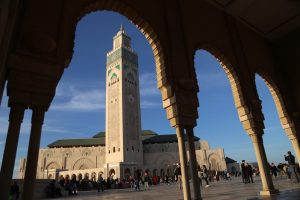 Upon arrival, we’ll collect you and drive to Casablanca where you’ll visit the Hassan II Mosque, the largest outside Mecca and experience the coastal Cornish seaside. Afterwards, we’ll leave for Rabat, the capital of Morocco. Here, you’ll see the Hassan Tower, the Oudaya Kasbah before checking in to your Riad at the heart of the Medina. Overnight in our Hotel/Riad

After breakfast in your Riad, you’ll start travelling to Meknes, another significant imperial city in Morocco, known as the Ismaili capital of Morocco. In Meknes you’ll see the famous gate Bab Mansour, the Sahrij Souani Bassin and the Moulay Ismail Mausoleum. After lunch, your journey continues on to Volubilis, the well preserved site of Roman ruins, dating to 25 BC. Afterwards you’ll continue on to Fes via the foothills of the Rif mountains arriving there in the late afternoon. Overnight in our Hotel/Riad

Today we embark on a fully guided tour of the city of Fes. Explore the tanneries, souks, potteries, and the Medina, and learn the fascinating history of the city. We’ll later return to the hotel to get ready for an optional night of Moroccan entertainment and food at a restaurant in town. (Full day city tour included)Overnight Fes .

After breakfast we’ll leave Fes travelling towards Ifrane, a beautiful mountain village, referred to as “the Switzerland of Morocco”. During this journey you’ll experience glimpses of the Middle Atlas and Higher Atlas mountains. Stopping at Azrou – a Berber village in the middle of the famous cedar forest (the largest in Morocco, you may well have the chance to see some Barbary apes. Afterwards we’ll travel through the Tizi N-talghamt Pass to Midelt and along the magnificent Ziz Gorges carved through volcanic rock. Overnight in our Hotel/Riad.

In your hotel you’ll travel to Merzouga via Errachidia and Erfoud. You’ll be travelling via the Ziz Gorge, taking in views of the High Atlas plateau, noting how the scenery changes to reveal hints of the desert as you approach the city of Errachidia. Here you’ll have lunch and enjoy Berber hospitality. Afterwards, you’ll travel along the luxuriant Ziz Valley, stopping for panoramic views along the way to Erfoud and Rissani. Arriving at Merzouga in the afternoon, you’ll be welcomed with a glass of mint tea before checking in to your hotel

After breakfast in the Hotel you can start exploring the area. You’ll visit the Gnawa people, originally slaves brought from Sudan, to experience their music and lifestyle, whilst not far away there’s the lake of Merzouga with its bird populations. You may also want to visit the nomad wire house where many Berber handicrafts are priced lower than in the big cities. In the afternoon it’s time for your camel trek, guided by an experienced camel man as you set off to explore within the sand sea of Merzouga. Dinner is in front of the tent where you will spend the night the camp.

Your camel man will wake you up early in the morning to watch what well may be the best sunrise of your life after which you’ll camel-trek back to the village of Merzouga admiring the unique beauty of the spectacular Erg Chebbi sand dunes – changing with the light as the day progresses. After breakfast in the Riad, you’ll leave for Rissani, Tinghir and Todra gorges – the highest, narrowest gorges in Morocco. Lunch in the heart of the gorge precedes a drive through the Dades Valley, where you’ll see the majestic sand castles and the amazing rock formations known as “monkey toes”. Overnight in our Hotel/Riad.

After breakfast, we’ll continue our tour towards Ouarzazatte through the path of a thousand Kasbahs (fortress) stopping at Kalaat Mgouna, the centre of the Valley of Roses, famous for its annual Rose Festival.

We’ll continue to the Unesco World Heritage site, the Ksar of Ait Ben Haddou ,Overnight accommodation will be in a local Riad.

we’ll head to Taroudant via Taznakht, stopping at Taliouine to visit the Safran co-operative. If your visit coincides with the Safran harvest, you will have the opportunity to meet the Berber women with their families harvesting the safran in their fields. We should arrive at Taroudant in the afternoon, where you’ll see the ramparts and walk within the small alleys in the Medina. Taroudant is often referred to as “the little Marrakech” because most of its walls were built by the Saadian dynasty in the 16th century before they moved to the great “Red City”.

Today we travel from Ouarzazatte to Taroudant; this Berber town developed in turn of a market located in the southern region of Morocco. Noted for local crafts (jewelry, carpets, pottery etc.), Taroudant is located on the route of the caravans (used for trade). It has said to resemble a smaller and less-chaotic Marrakesh. We’ll spend this night at a local Riad / Hotel.

From Taraoudant you will continue on to Tafraoute, a delightful city, sheltered from the hot African weather by granitic rocks that surround it, a spectacle of nature that allows you to experience this unique part of Morocco. You will continue along this route to Agadir where you’ll spend the night.

We’ll continue today towards the Atlantic coast where Essaouira, the Pearl of the Atlantic, is located. In the afternoon we’ll check in at a local Riad and then head out to watch the sunset from the Murallas (walls that fortify the city), an experience you can’t miss. You’ll get a chance to explore the ancient city  ‘Mogador’ (Essaouira), a name given by the Portuguese. Rated as one of the most beautiful coastal cities of the Atlantic, its medina is a canvas of blue and white surrounded by lengthy beaches and the ancient citadel walls of the Portuguese colonial époque. In the evening, we’ll be treated to a dinner of the freshest fish in the city, and later take an evening stroll through its quiet and picturesque setting.

Today you’ll get the chance to discover Essaouira for yourself. Essaouira has a rich historical background as well as a very touristic appeal due its annual music Festivals. Located by the ocean, its blue and white port is a center of commerce for the local fisherman. There, you’ll find some of the freshest seafood in all of Morocco. You may want to have lunch at the local restaurants that reside near the port, where you can pick the fish of your preference to be prepared to your liking.

After breakfast at your hotel we’ll depart to Marrakesh, where you’ll spend the night at a local Riad / Hotel.

Today we’ll have a guided tour of Marrakesh. You will explore the main attractions and monuments of the city including the famous Jamma el Fna square, Kotoubia mosque, the souks, palaces, and museums. We’ll also explore parts of the city such as Gueliz, The Menara Gardens and Marjolle.

Depending on your flight, we may relax during the early part of the afternoon before departing to Casablanca, arriving around 4 pm, where our tour ends.

NOTE : If the itineraries that we offer does not match what you’re looking for ,contact us and we will prepare the trip to your needs and requirements

Send Us an EMAIL BY 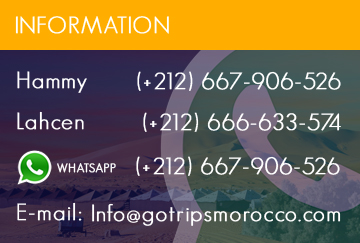